The RESERVOIR’s collaborations illustrate the values shared with heroes of the past or present, each being the subject of a specific limited edition watch.

The RESERVOIR Blake and Mortimer collection pays tribute to the daring adventures of Captain Francis Blake and Professor Philip Mortimer, two friends and heroes of authentic and risky stories.

In the heart of Asia on September 26, 1946, Colonel Olrik is preparing to lead an armada of bombers to set the capitals of the free world ablaze… "By Jove !!!", in England, Captain Francis Blake and Professor Philip Mortimer are determined to lead the resistance!

On September 26, 2021, the 75th anniversary of the appearance of the characters Blake and Mortimer has been celebrated. It was September 26, 1946, in the first issue of the weekly Tintin. Even if the success is immediate, neither the young readers, nor the author, a close collaborator of Hergé, Edgar P. Jacobs, imagine only the two characters - Francis Blake, the handsome officer with the physique of a young pioneer, and Philip Mortimer, the iconoclastic scholar with the red beard -, will become cult and their adventures will continue to fascinate young and old for decades. The spirit of adventure of Blake and Mortimer, their daring, their determination, their selflessness too, made them true heroes. These values and the graphic universe of E.P. Jacobs, whose features were admired by the great Hergé himself, are source of inspiration for the RESERVOIR collection.

First piece of the collaboration between RESERVOIR and DARGAUD, publisher of the Blake and Mortimer series, the RESERVOIR Blake and Mortimer "By Jove !!!" takes up the graphic universe of Edgar P. Jacobs down to the smallest detail. It is Francis Blake who indicates the minutes with his arm, the hour and minute digits using the lettering of the comic strip. The 316 L steel case with brushed finishes with a diameter of 41.5 mm for total comfort when worn, reinforces the vintage look of the piece, mounted on a black leather strap fitted with a folding clasp. The case back is engraved with a design of the swordfish and the words "So British since 1946". 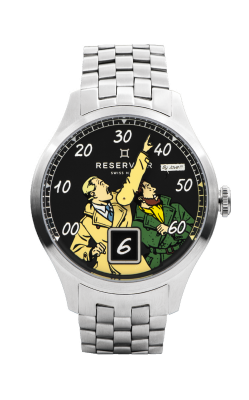